This recipe was in the January 1994 issue of Bon Appétit.  And they had me at Cranberry-Pecan Bread Pudding w/Bourbon-Caramel Sauce. I remember making it for the first time for a holiday dinner at my mother-in-law’s in Vancouver.  (Oh wait…isn’t there some cooking “law” about not trying a new recipe for an important occasion like that?)   Well, it was a hit then and it has become a favorite in our house and I couldn’t even begin to tell you how many times I’ve made it since.

It’s our friend Tom’s favorite dessert and I make it every year for his birthday (even though his birthday is at the end of July!  Not exactly a typical summery dessert.  In fact, for his last birthday, we had a little dinner party at our house and it was one of hottest days of the year!  Oh well.  That’s was A/C is for, right?  And Tom is so appreciative and his reaction when he takes that first bite is so worth it!) 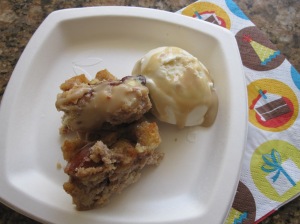 I’ve since learned that bread pudding is also our son Kyle’s fiancée Calla’s favorite dessert (Oh…wait!  Kyle’s  fiancée??  Did I neglect to tell you all that Kyle and Calla are getting MARRIED?!?!?  They met in college…have been together six years.  We just adore her and are over-the-moon happy!) and I’ve made it for her a few times as well.  She absolutely loves it.  We will be spending Thanksgiving withher family (we adore them too!) in Sonoma (for the fourth year) and I’ll be making it ahead of time and taking it on the road with us (again).  It’s a hit with her family too and now has become a regular in the Thanksgiving dessert line-up.

Now we just need to figure out how to serve it at the wedding!

(The original recipe was made in individual ramekins and I’ve done that once, but its a lot easier to bake it in a pretty baking dish).

Bring whipping cream and sugar to boil in heavy medium saucepan, whisking constantly. Boil until mixture bubbles and thickens, stirring often, about 5 minutes. Add butter and bring to boil, whisking constantly. Whisk in bourbon. Cool to lukewarm. (You will adding 1/2 cup of the sauce to the bread pudding! Sauce can be prepared 1 day ahead. Cover and refrigerate. Reheat before using.)

Whisk cream, half and half, whole eggs, egg yolks, vanilla, 1/2 cup caramel sauce, sugar and cinnamon in large bowl to blend. Mix in cranberries and pecans. Add bread; toss to coat. Let stand until bread has partially soaked up custard but is not mushy, pressing down gently on bread, about 3 minutes. Stir in white chocolate pieces or chips. Pour any remaining custard over pudding. Bake until brown on top and just set, about 40 minutes.

Serve warm or at room temperature. Top each serving of pudding with a scoop of vanilla ice cream and spoon warm sauce over.