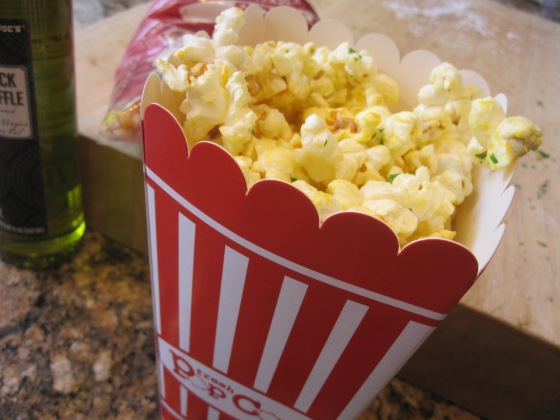 Carole, my Birthday Buddy at work, gave me a bottle of black truffle oil (and some delicious dark chocolate crisp thingies and an adorable apron) and I’ve been trying to figure out what to do with it.  You see truffled this and truffled that everywhere now.  My brother-in-law Josh makes a yummy truffled mac & cheese.  I had a really delicious appetizer called Truffled Egg Toast (sorta like a French toast, only truffley, with fontina cheese and asparagus) the other night at Davanti Enoteca.

But I wanted to come up with something clever for New Year’s Eve.  I’m bringing an appetizer and a dessert to the party we’re going to (okay, it’s Chip & Dale’s party.  Yep…friends of ours whose actual names are Chip and Dale.  The first time we went to their house for dinner, I told our then 15-year-old daughter that we were going to Chip & Dale’s for dinner.  She made a horrible face and said, “gross…you’re going to Chippendales?  For dinner?  Do they even have food?”  Lol!!!)

Okay, again I digress.  I’m already doing Sam’s Smoked Salmon Deviled Eggs and a Chocolate and Mixed Nut Tart.  But what to do with the truffle oil? Then I remembered that there’s a newish restaurant here called Brooklyn Girl and they serve different gourmet popcorns as a snack before dinner.  The night we were there it was something curry.  So how about a truffled popcorn?  And I had seen some cute little popcorn boxes at Cost Plus!  Bingo.  And did you know that Trader Joe’s even sells organic popcorn kernels?

So I searched and pulled a few different recipes (from Martha, Ina Garten, the Washington Post and Epicurious) and came up with this.  How fun will this be for New Year’s Eve?  Plus…it’s a rainy day in San Diego.  Tony’s at the Charger-Raider game.  I’m going to be able to sample it while watching “The Five Year Engagement”.  HA!

You can pop the popcorn however you like.  I experimented first with Trader Joe’s micro popcorn.  Each mini bag makes about two cups.  If you’re using kernels, 1/4 cup kernels will yield about 8 cups of popped popcorn.

Heat the butter and truffle oil in a small saucepan over medium-low heat until melted and warmed through.

Place the freshly popped popcorn in a large bowl.  Add the butter/truffle oil and toss well.  Add the cheese and parsley; toss to distribute evenly.  Season with salt & pepper.